Recent Exhibition at the La Cima Club in Irving, Texas

An important piece of the New York art history involves many metropolitan area artists whose work focused on scientific discoveries. These artists specialized in artistically illustrating the emerging science being uncovered by a wave of technologies newly available to research scientists since the 1940's. These artists collaborated with scientists doing new research with the most advanced scientific technologies. New discoveries led scientists to new realizations. The fabric of existence was being understood in entirely new ways.

The phenomenon of Science Art has been one facet of the New York art scene since the 1960's. It was the focus of the New York State Council on the Arts during 1965 when the Council sponsored a large regional Art-in-Science exhibition held at the Albany Institute of History and Art.

Patricia C. Berlin was one of the artists who participated in this exhibition. Her work at the Rockefeller University in Manhattan was the lifeblood of her inspiration. She is an artist whose subjects would be magnified 100,000 times before she could begin to paint them. "The world was always changing for me. There was no time that everything stood still. Life has just been one of constant change."​ Click on the story of Patrica Berlin Cleary and our family below.

​For more information or assistance,
please contact Alex Berlin at either alex@clearygallery.com
or by calling (214) 683-1758.

Click the tabs at the top of the page
​to purchase your own Giclee, Card, or Photo CD
of Patricia Cleary Berlin's original artwork

Patricia Cleary Berlin is a graduate of the University of Michigan School of Architecture and Design and was an Interior Designer at the Rockefeller University, New York City (1963 – 1984).​

Mrs. Berlin has exhibited in numerous medical and scientific institutions, among them the Smithsonian Institution in Washington, D.C., the Institute of History and Art in Albany, N.Y., and the Rutgers University Medical School. She has paintings in the permanent collection of the Institute for Medical Research in Toledo, Ohio.

Mrs. Berlin’s approach is to use photomicrographs made by the electron microscope as a basis for works of art that enhance the essential of the material under scientific examination, while leaving out the non-essentials. The derivation is immediately apparent to scientists working in the field involved. Some of the paintings follow the photomicrograph almost “as is”, except for color. Patricia Cleary Berlin died in 2002. 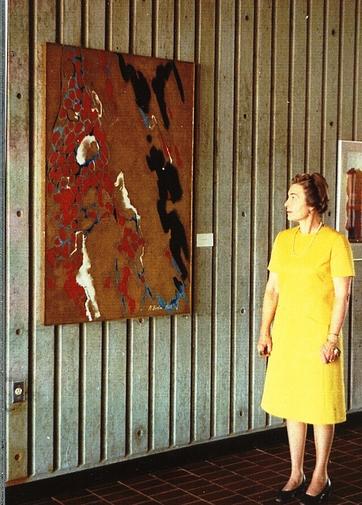